5W20 Vs 5W30? Find out all you need to know about these two motor oil. This write-up will be comparing the two, Thereby leaving you to make the right choice. The main purpose of motor oil in the engine is to lubricate metal parts so that they do not rub together, create friction, and wear down. 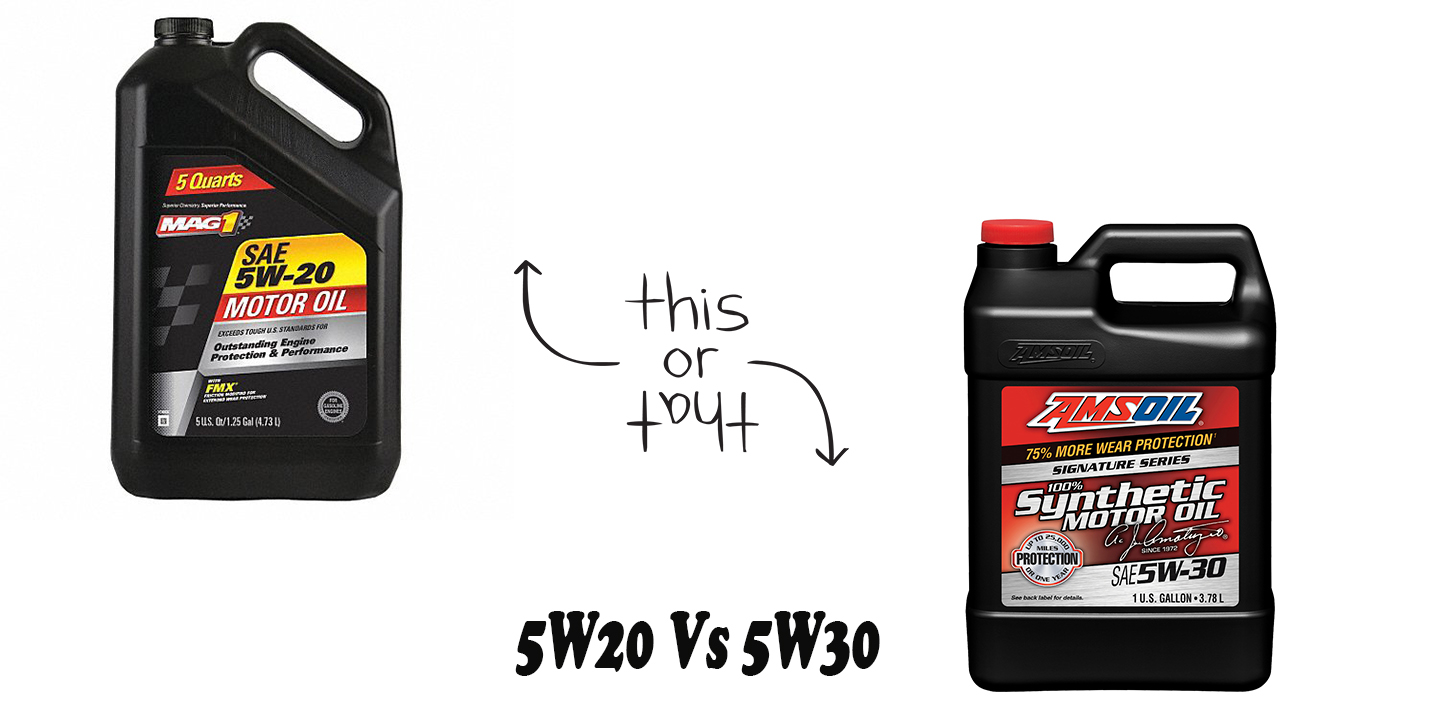 However, the lubrication helps to keep the engine significantly cooler. Also, it seals piston and cylinder gaps while coating and protecting engine parts from sludge acid, water, and other things that cause rust and corrosion.

An important factor in these functions of motor oil is the oil viscosity. Viscosity has to do with the thickness of the oil and its resistance to flow.  However, a higher oil viscosity number indicates a thicker oil, vitally important in an engine’s bearing clearances.

Older engines were made with much looser tolerances, which lets oils like 10W30 to be commonplace as an OE recommended oil in the 1990s and before.

Whereas more recent engines are built with better technology, and much more strict tolerances, meaning that a much thinner oil is necessary to properly lube the engine’s bearings, and circulate quicker and freer throughout the engine. And most times with less overall oil in the system.

Furthermore, viscosity is what determines how your engine’s oil will deal with changes in temperature, pressure, and speed. So just ensure you go for what the manufacturer recommends for oil viscosity.

What Is The Meaning Of Oil Viscosity Numbers (5&10)?

The 5 and 10 digits refer to the viscosity at cooler temperatures. That is to say, when you are comparing 5w30 vs. 10w30, the thinner 5w30 will circulate quicker, and pass through bearing tolerances better during an engine startup in the winter or colder climates. The “W” behind the five and the 10 shows that those are the viscosities in colder or winter temperatures.

Further, the viscosity of the winter number is tested at 0 degrees Fahrenheit. The 30 refers to the viscosity at higher temperatures, which shows that the oil is thicker at higher temperatures, so it adheres to the metal parts of the engine. Thereby, protecting them as they operate. This number is tested at 212 degrees Fahrenheit.

The viscosity number is the result of the Society of Automotive Engineers (SAE) determining how fast the oil will flow through a certain size tube. I believe the explanation above has given you clue about what the viscosity numbers mean. So let’s get to the business of comparing the 5w20 and 5W30.

When it comes to 5w20 vs 5w30 motor oil, the 20 simply indicates that the oil has a lower viscosity and is thinner at higher temperatures. This enables the 5w20 motor oil to reach engine parts faster and create slim drag that reduces fuel economy.

So, when shopping for the right multi-grade oil for your car, you need to consider your car’s normal operating temperature and mileage requirements and more. Though 5W-20 oil is the better choice in low temperatures and colder climates, generally.

None of the two oils is any better or worse than each other. The best oil depends on your engine requirements and car type. There are factors you need to consider when choosing the right multigrade engine oil for your car.

5W 30 oil is best for people who drive in seasonal or hotter climates. The oil has a better viscosity index than 5W-20 oil and is more versatile in terms of its warmer temperature range. However, drivers will get better protection with 5W 30 oil in cold as well as hotter climates.

5W-20 oil is perfect for people who live in colder climates with low temperatures. The oil can be used for light-duty applications, for engines that do not reach very extreme temperatures. It also provides excellent start-up performance in colder temperatures.

Take note: Older cars may need a high mileage variant of their regular oil (5W-20 or 5W-30). In such cases, the high mileage oil best protects the engine at extreme temperatures from friction and engine drag.

If your engine allows any of the oil, you can proceed to use it. But if it doesn’t, you’re putting your engine at risk for engine damage and reduced performance. Why is It so?  Exposing your engine to slightly thicker oil than it’s used to leads to more friction. Your engine will have to work harder to carry out its duties with the added resistance of the thicker oil.

Also, the increased friction due to a heavier oil can slow down your internal combustion engine thereby leading to oil leaks, engine deposits, and sludge formation. Moreover, the wrong oil in newer engines may void them of their warranty, and put your engine at risk of eventual engine damage. The safest way to make sure that your engine accepts a particular oil is to consult your owner’s manual.