Belgium School System is regulated and for the most part financed by one of the three communities such as Flemish, French, and German-speaking. Thus, each of these communities has its own school system, with a little difference among them. Here, the federal government plays a very little role which is by it deciding directly the age for mandatory education and indirectly the financing of the communities. 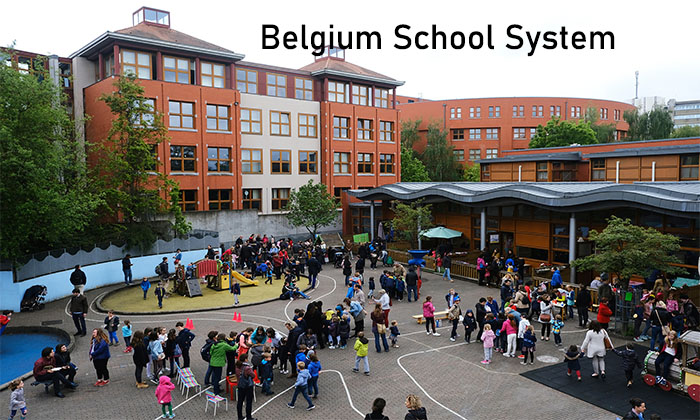 WHAT YOU MAY ALSO LIKE: What is Post-Secondary School in Canada: Postsecondary Education Systems in Canada

Belgium is divided into three distinct language communities; The Dutch-speaking, the French-speaking, and the German-speaking. Every community has its own regulations in regard to the education system and enrolment in schools

Pre-school education is not compulsory. In this level of education, there are few formal lessons, classes that actively prepare children for school on an educational and social level through play-focused learning.

Nurseries are also available for babies and toddlers up to 2,5 years and kindergartens (kleuteronderwijs in Dutch, enseignement maternelle in French) from them until they are up to school age.

Primary education – larger onderwijs in Dutch and enseignement primaire in French – is very compulsory from ages six to 12 children in Belgium. But, the local departments of education are in charge of the requirements and curriculum of each region.

Children get assessments at every level, from pre-primary to secondary schooling, to determine whether they are ready to move to the next level of education.

Secondary education in Belgium – secundair onderwijs in Dutch; enseignement secondaire in French – is very compulsory from ages 12 to 18. However, after age 16 students can decide to study part-time and undertake vocational or technical training.

Public secondary schools in Belgium; States schools are free to all pupils, although they may require a contribution for textbook costs. The curriculum is broad to start with, but as students move into higher years, they have more choice about the subjects they take. However, in the final cycle, between ages 16 and 18, it is also very possible for students to study part-time while undergoing vocational training.

The International Baccalaureate curriculum is highly recognized internationally and by higher education institutes. It is taught at a good number of primary and secondary schools in Belgium.