Biarritz, France is a city on the Bay of Biscay, on the Atlantic coast in the Pyrénées-Atlantiques department in the French Basque Country in southwestern France. The city is located 35 kilometres (22 mi) from the border with Spain. 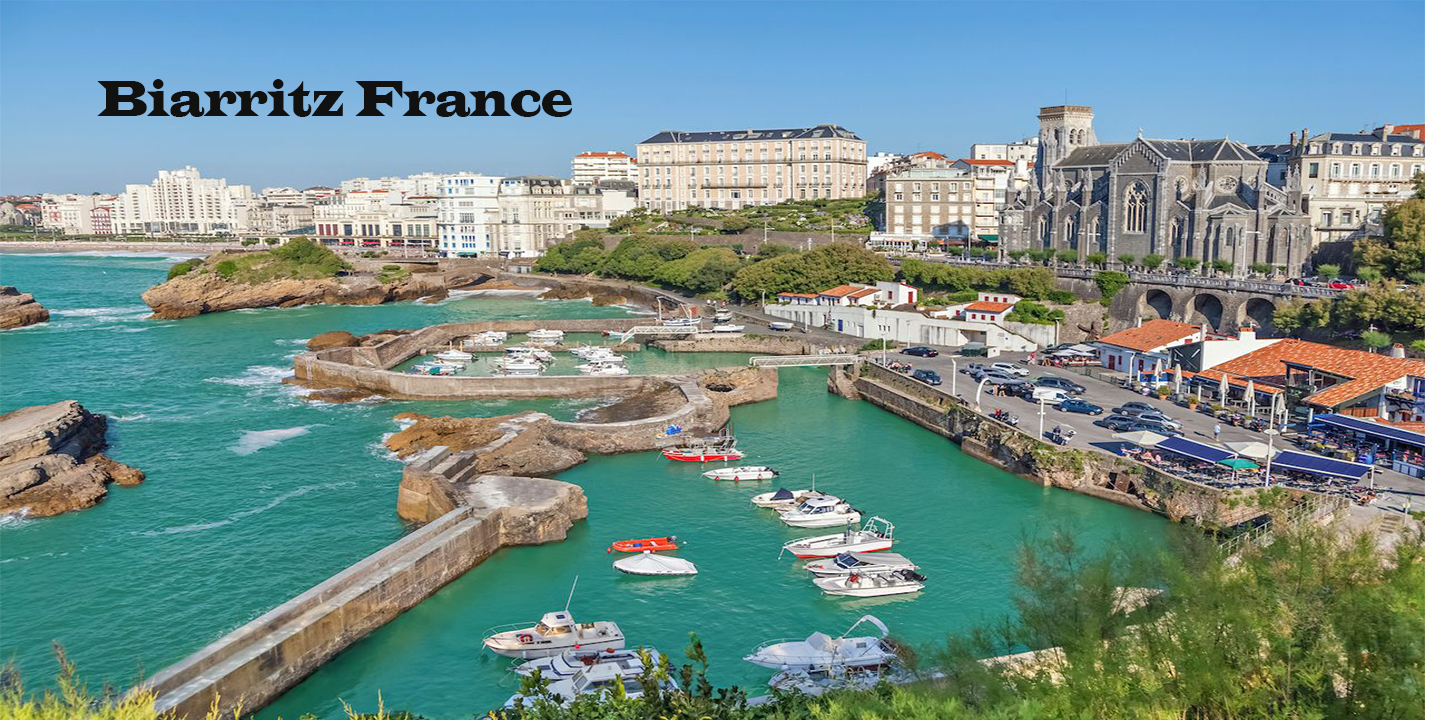 However, it is a luxurious seaside tourist destination known for the Hôtel du Palais (initially built for the Empress Eugénie circa 1855), its casinos in front of the sea and its surfing culture.

Moreover, it was once a small fishing village and was made fashionable after 1854 by Napoleon III and his Spanish empress, Eugénie. The British are majorly behind its growth as a winter residence.

The City’s mild climate, the variety of beaches and scenery, and the town’s luxurious tourist accommodations continue to attract an international clientele, though the exclusive upmarket image of Biarritz has changed.

Tourism is a bit more diversified, with the organization of festivals, conference facilities, and a centre for thalassotherapy (the use of seawater, algae, mud, and other marine items as therapeutic treatment).

However, the beaches are divided by a rocky promontory, and the town is a popular resort for windsurfers and surfers, who descend on Biarritz in July when it conducts a surfing festival and hosts the European longboard championships.

Biarritz, France has a temperate oceanic climate, Cfb in the Köppen climate classification. The town is one of the wettest cities in Metropolitan France. It has a mild climate that keeps drawing from within and outside the country.

Top-Rated Attractions & Things to Do in Biarritz

Biarritz is considered one of the most desirable beach destinations in France and is certainly among the most glamorous.

The Pristine sandy beaches, beautiful coastal villas, and stylish restaurants provide a sophisticated ambience. Find out the best places to visit and things to do in this legendary beach town.

Grande Plage is Biarritz’ most central beach. The beach has attracted high-society vacationers since the Belle Epoque. This wide, sandy beach starts at Bellevue close to the Boulevard du Général de Gaulle and extends to the Hôtel du Palais.

Furthermore, lifeguards are on duty starting from May through October with more extended hours during the high season.

Take note; this beach has heavy surf, and water safety is posted on a daily basis. During certain times of strong currents, bathing, swimming, and surfing are prohibited.

Plage du Miramar is a beautiful beach, a perfect place to relax and enjoy the refreshing seaside breezes. Extending from the Hôtel du Palais to the Pointe Saint-Martin, the Plage du Miramar is highly outstanding by its spectacular scenery and dramatic shore-breaking waves.

Although the sheltered beach provides a sense of tranquillity, rough seas and strong currents (including riptides) which make swimming dangerous. Before entering the water the condition of the waves and currents should be considered. And also, lifeguards are on duty in July and August.

Miramar draws sunbathers, and spa-goers, who frequent the nearby Thalassa Sea & Spa centre in the five-star Sofitel Hotel.

Biarritz Aquarium is perched on a cliffside, a breathtaking piece of the oceanfront property opposite the Rocher de la Vierge. It is one of the largest aquariums in Europe, the 7,000-meter space features more than 20 aquarium tanks.

Moreover, the natural-looking aquarium tanks offer a wide range of amazing species, from lobsters and sea urchins to turtles and hammerhead sharks. Nevertheless, the aquariums represent species from all the Seven Seas, including an array of tropical fish and an 11-meter-long Caribbean lagoon.

Another amazing thing about the Biarritz Aquarium is the outdoor terrace, with a sealed pool, where the adorable sea mammals swim and play.

Biarritz Lighthouse stands at an essential location overlooking the coastline of Cape Hainsart. It was built in 1834, the lighthouse is located at the tip of the Pointe Saint-Martin, serves as a boundary between the sandy beaches of the Landes Coast to the south and the rocky coastline to the north.

However, Visitors may climb the 248 steps of the lighthouse to take in the scenery from this incredible vantage point. Also, the 73-meter-high lighthouse commands sweeping panoramas of Biarritz and the Basque countryside