Bitcoin Prediction 2020? Bitcoin is a digital currency invented in 2008 by Satoshi Nakamoto. It began operation in 2009 when its implementation was launched as open-source software. Bitcoin is also known as a decentralized cryptocurrency without a central bank or particular administrator that can be sent from user to user on the peer-to-peer bitcoin network without the need for intermediaries. 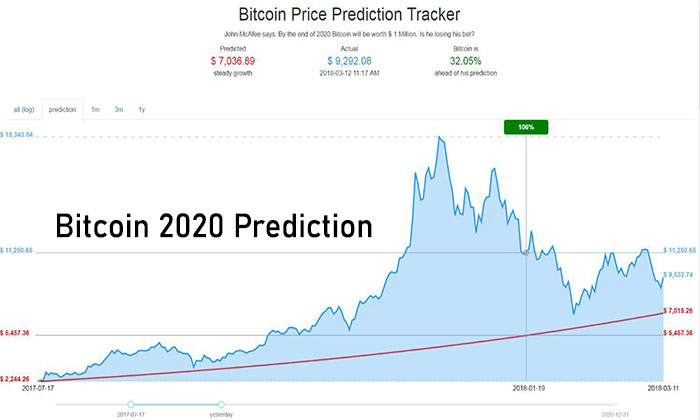 However, this digital currency was created as a reward for a process known as mining. Thus, they can be exchanged for other currencies, products, and services.

CHECK THESE OUT: Best Investments to Make In 2021: Best Online Money Investment Service

According to coin Metrics and Forbes, on 11 March, 281,000 bitcoins were sold by owners who held it for thirty days, which is roughly one month. Thus, it is compared to 4,1313 bitcoins that had laid dormant for about a year, which indicates that the vast majority of the bitcoin volatility on that day was from recent buyers.

In March 2020, due to the coronavirus pandemic, cryptocurrency exchange Kraken experience an 83% increase in the number of accounts registrations over a week of bitcoin’s price collapse, which is a result of buyers looking to capitalize on the low price. Do you want to know what expects forecast for BTC in 2020? An end has come to your search.

Due to the covid-19 pandemic, 2020 has been a time for the cryptocurrency community, which Bitcoin is part of. When the world experienced lockdowns in march, the financial markets took a sharp tumble that it’s currently dubbed the covid-19 crash.

However, between the weekend of the 7th and 8th, and 13th March, the price of Bitcoin crashed from over $9,000 to around $4,000. This was the result of a flash crash that occurred throughout the 12th, as investor confidence started to fall rapidly with the spread of coronavirus.

It’s an event that happens in order to control the circulation of BTC tokens and make the cryptocurrency more scalable. Just as the maximum of bitcoin is 21 million, the halving is set to occur after 210,000 blocks, which equates to roughly once every four years.

This procedure cuts down the reward for mining new blocks in half with the idea that it will slow the speed at which new BTC tokens are generated.

So, after the last halving in 2016, the price of BTC saw a 93% increase all through the year. If crypto continues in this pattern this time around, we could see the price of BTC rise above $15,000 before the end of 2020.

What are BTC predictions in 2021? Carl Eric Martin took to Twitter to share a graph that follows BTC bullish run in 2017, again and after-effects of the 2016 halving. This means that, if Bitcoin follows the same price movements in the wake of the May 2020 halving, its price would Max out at $318,438 by Oct 2021.

Raoul Pal, the CEO of an investment strategy research service known as The Global Macro Investor, believes that the US economy has a bleak future- and suggests that savvy Investors should hedge with both gold and bitcoin. However, it predicts a staggering price increase of 10,710%, with BTC hitting values of $1 million by 2025.