How to Become A Sponsor for an immigrant Friend? Do you have a friend that wants to come over to the US, and you want to sponsor the person, but don’t know how to go about it? Find out how you can achieve your goal of bringing your immigrant friend over, with the guide in this write-up. 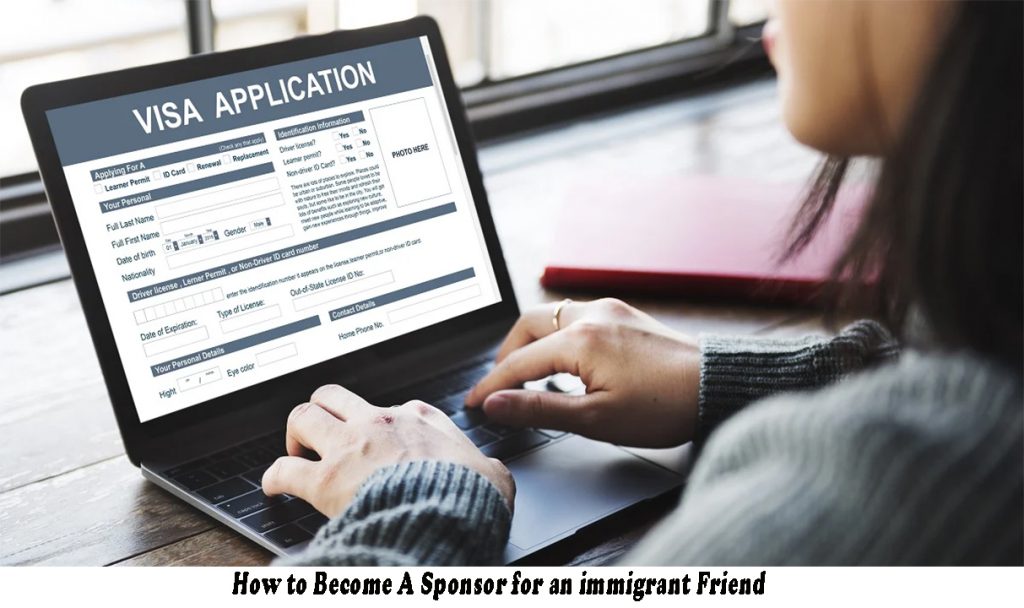 How to Become A Sponsor for an immigrant Friend

So, if your friend is applying for an immigrant visa, you should file Form I-864 when your friend has scheduled an interview with a consular officer at the United States Embassy or Consulate.

Moreover, if your friend is already in the Unitedcommunitybank States and needs you to sponsor them for an adjustment to a permanent resident status known as a green card, you may file Form I-864 when they submit their application for an adjustment of status.

Who can Become A Financial Sponsor? – How to Sponsor an immigrant Friend

To be a financial sponsor, here are the requirements you must meet:

Become A Sponsor By acting as a Legal representative before the U.S. Citizenship and Immigration Service (USCIS)

Normally, in the United States, you have to be a licensed attorney to represent others in legal proceedings. But Immigration is one of the few exceptions to this rule. The U.S. immigration law permits non-lawyers to represent non-citizens in immigration proceedings. If you do represent your friend in this manner, your role is similar to that of a lawyer.

However, the 8 C.F.R. § 292.1 contains a list of persons who may represent people before USCIS. This section says that you may represent a “personal friend” before the USCIS if You appear on an individual case basis;

You do not charge your friend for representation, and the Department of Homeland Security official, before whom you are appearing, allows you to represent your friend. This is because lots of people seeking to enter the U.S. can’t afford to pay a lawyer to represent them. So, representing your friend before USCIS may be a big help to them.

What Are Income Requirements to become A Financial sponsor?

For you to be eligible to Financially sponsor your friend, there are basic financial requirements you must meet. You must know that your household income must be greater than 125% of the US poverty level for your household size.

Moreover, in conjunction with the US Department of Health & Human Services, USCIS has issued the following guidance on the matter:

How to File an Affidavit of Support

To file an affidavit of support do this:

Depending on your situation, you may need to include one or more of the following documents: For self-employed- a copy of your Schedule C, D, E, or F, from your most recent federal income tax return.

Before you commit to financially sponsoring your friend’s immigration petition, you should know exactly what it is that you’re committing to. Know that, as a financial sponsor, you guarantee that the immigrant will receive enough financial support from their own employment and your financial aid that they will not become a public charge.

And if your friend gets any benefits from a means-tested government assistance program, you will be liable for fines and/or a civil lawsuit to repay the US Government. Nevertheless, this commitment will last until the immigrant becomes a naturalized US citizen or pays into Social Security for 40 quarters (usually 10 years), whichever comes first.

Can I sponsor a friend for immigration?

Can an American citizen sponsor a friend?

Yes, you can sponsor your friend’s immigration petition financially. Being a financial sponsor to an immigrant can make a big difference to their application and can be the difference between being approved or rejected.

What are the risks of sponsoring an immigrant?

The risks of sponsoring an immigrant are high because there are more obligations on the sponsor who signs an affidavit than on the immigrant. Thus, the immigrant may quit a job filing a lawsuit against the sponsor requesting support