Microsoft Teams Are No Longer Going to See Any Updates on iOS 13 And Older. It has been fully confirmed that the Microsoft team’s app is not going to support iOS 13 once iOS 15 arrives. For all iPhone users using Microsoft teams, there is an urgent need to update the platform as it will only work on iOS 14 & 15.  It, therefore, means every user without these two versions to get the update soon. 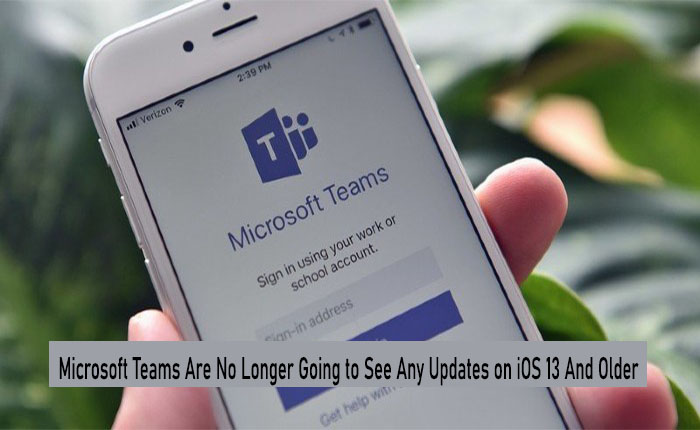 Microsoft teams have revealed that its Video conferencing service is no longer going to function below iOS 14 and above. This means that those with the older versions need the upgrades. However, the Microsoft company says that its existing Microsoft Teams build 3.17.0 will continue operating on devices below iOS 13. But such devices will no longer receive any app updates soon.

Microsoft teams are no longer going to see any updates on iOS 13 and older. The implementation will begin in October 2021 with all changes in full. The Microsoft company says that users will no longer be able to reinstall their Microsoft Teams build from the iOS app store if they uninstall Teams or get their devices to reset.

However, this move is seen as what the company did Microsoft Outlook email service as observed by MSPowerUser. Recently Outlook has announced it would no longer support iOS 13, and Microsoft also at this time saying it would only support IOS 14 & 15 versions under its new policy.

Furthermore, all these changes are a result of Microsoft making Teams be more mobile-friendly. As workers will choose to make calls from their mobile device just like hybrid working keeps gaining popularity.

Microsoft revealed recently that its users will now access the app for their video conferencing service while in meetings on iOS and on Android devices. Previously, the app does not have such capacity but was only limited to desktop users of Microsoft Teams. With this improvement, mobile users can participate in meetings even when out of the office or while traveling.

Also, the company has released updates for Teams for iOS and Android. This allows the platform to read chats and post loud out on devices. This radar will only apply to content within Microsoft Teams and may allow users to focus on a specific message or chat at a time on the desktop version of Teams.