Nvidia Windows 11 Driver with DLSS Support for More Than 100 Games? Nvidia has released an update that the latest Game Ready driver will support Death loop in Windows 11, including some other top games that are imminent just like- Far Cry 6. While also realizing that it is a milestone in terms of DLSS Exceedingly over 100. 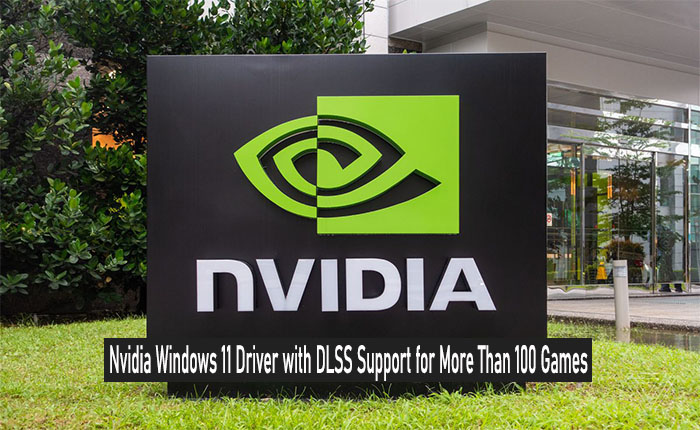 So, apart from the excellent death loop supported in Windows 11, a large number of high-profile games that are about to be launched are now also covered by the new driver.

The big highlight of the new driver update is the added support for Windows 11. Thus, the latest OS from Microsoft is set to be launched on October 5. That’s why in this update, Nvidia ensures that all the new features in Windows 11 work flawlessly.

Still on Nvidia Extends DLSS Support to More Games. Another outstanding highlight of the update is that it comes with DLSS (Deep Learning Super Sampling) support to 28 more games, take the overall DLSS supported game count beyond 100.

DLSS is Nvidia’s own AI-based temporal image upscaling solution, that is capable of upscaling games to a higher resolution while providing smoother frame rates. DLSS is currently supported only by Nvidia’s GeForce RTX 20 and GeForce RTX 30 Series GPUs.

However, this very update was not just centered on Windows 11 but was also highly important for some big titles dropping later on.

The latest Game Ready driver from Nvidia offers support for Death loop on Windows 11, apart from other big titles coming soon like Alan Wake Remastered, which coincidentally will be launched on October 5, alongside Windows 11. The driver also provides support for the highly anticipated Far Cry 6, also dropping on October 7.

Some other games optimized for Windows 11 by the new driver update are Hot Wheels Unleashed, World War Z: Aftermath, Industrial, and New World.

Deep learning supper sampling is a great deal for upcoming games like Alan Wake Remastered, as it is built on Unreal Engine 4, which enables developers to integrate DLSS into their games using the Unreal Engine 4 DLSS plugin.

The game will be released with DLSS support, and Nvidia has promised a 2X performance boost at 4K. The company even displayed through graphical representation how GeForce RTX GPUs can achieve 60fps at max settings in 4K with DLSS enabled.

However, the major marked jump in frame rate is visible for GeForce RTX2080 Ti, from close to 70fps to 120fps. Furthermore, the company announced its new Deep Learning Anti-Aliasing (DLLA) test server for Elder Scrolls Online. DLAA is an AI-based anti-aliasing mode for people who want to maximize image quality.

The technology behind DLAA is quite similar to that of DLSS, but it works on a native resolution image to maximize image quality instead of boosting performance, according to Nvidia. Therefore, if you are a gamer preparing for the big upcoming titles, you need to get the latest drivers from Nvidia to get started and take full advantage of DLSS and DLAA in the upcoming games.