Utopia Falls is a Canadian TV show that combines hip y with science fiction. It was created by R.T. Theme with Joseph Magliozzi as showrunner. The show premiered on the streaming platform Hulu on February 14, 2020.  The show is the streamer’s latest attempt to reach the young adult crowd, and it boasts all the ingredients necessary to feel at home in the YA dystopia genre. 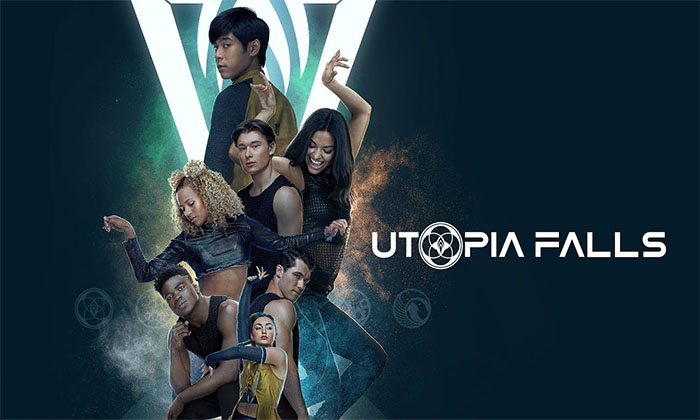 Furthermore, the show Utopia falls takes place 300 years in the future, where the residents of New Babyl, the last living colony on earth, all live in relative peace. Yearly, 24 of the colony’s teens are chosen to honor the colony’s founder, Gaia, by going into a competition in a dance. However, when a group of colony’s teens venture outside of the colony’s limits and discover an ancient archive.

Utopia Falls seeks to blend the traditional settings and themes of dystopian fiction with dance set pieces and a hip-hop soundtrack. Characters in the show rebel by trying to introduce the art and music of the past to the other citizens of their colony.

The show features a diverse array of actors, led by Robyn Alomar-Riot Girls and Akiel Julien -The Next Step. These two casts are the first people to discover the forbidden archive but quickly started sharing its wisdom and treasures with some of their peers, played by Robbie Graham Kunz, Humberly Gonzalez, Devyn Nekoda, and Mickey Nguyen.

The fans of the show (Utopia Falls) have been flooding the makers, requesting the return of the series for season 2. However, the slow response to the first season of the show is a solid reason for the makers to shy away from making an official announcement, the fan’s petition on change.org is a clear sign that the series was not as much of a failure as it was touted.

So, while the critical ratings of the show did plummet as the series progresses in season 1, there are some outstanding qualities that keep fans asking for more seasons.  The fate of the season 2 of the show is not clear as of yet, but going by the strong fan petitions, it can’t be denied that there is some chance of the series getting renewed for the season 2,3,4, etc.