What Did Bitcoin Start At? Bitcoin has been in existence for over 13 years. It was unveiled in 2008 and was created to revolutionize the monetary system. Also, BTC was introduced then as Bitcoin: peer-to-peer electronic cash system.” 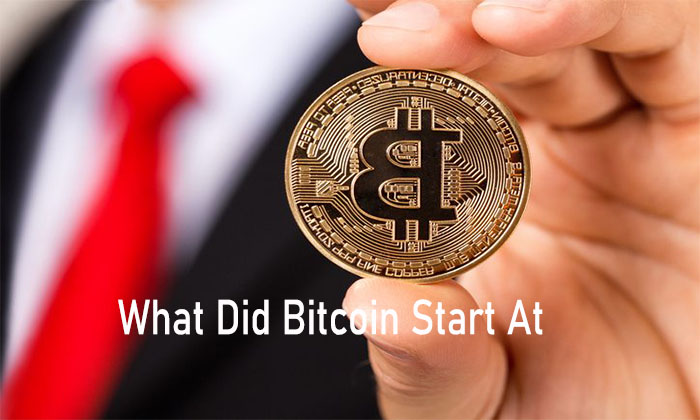 What Did Bitcoin Start At

However, the currency was designed to be open and resistant to censorship. With the use of blockchain tech, it creates an immutable ledger preventing double-spending. Are you searching for BTC price history? Do you want to know what its startup was? You’re in the right place.

Find out the price of bitcoin from the start till the date in this write-up. This article will give you the price history of bitcoin. Here is the summary of the BTC price from inception to date.

As you can see, there are the dates and years when bitcoin starts.

Bitcoin started trading at a value of $0.0008 US dollars by month-end, in July 2010. The digital currency price was low until April 2013, when it hit $250. It started growing from time to time, and as it keeps growing, the more the knowledge about it grows.

So, unlike the dollar which works as a single unit of currency, BTC’s value was fluctuating from $0 to $250. A new measurement was taken by introducing units called millibitcoin, micro bitcoin, and satoshis. To break it down, one bitcoin is equivalent to 1,000mBTC, 1,000,000 uBTC, or 100,000,000 satoshis.

Here comes the year bitcoin’s value increased. At the beginning of January 2016, the bitcoin price value was $433 and ended the year at $959, which is a 121% increase within 12 months.

In 2017 bitcoin was adopted by the Mainstream, and the introduction of new cryptocurrencies and coverage from mainstream financial media added about 1,729% to BTC value. That is, the BTC price rose from $1,035.24 to $18,940.57 starting from January to December 2017.

Coming to the year 2020, the year when the world is in total lockdown due to covid-19. Bitcoin Price at the beginning of the year was $6,950.56, in March the value was brought down to $4,841.67. This created a buying opportunity that helped bitcoin gain back its losses in May 2020. BTC started to emerge as a protective asset for the Millennial and Generation Z crowd.

Fast forward to 2022 bitcoin is now the most expensive cryptocurrency there is. However, this bitcoin explosion did not start in 2022 it actually started in late 2020 as a result of the coronavirus pandemic. As a result of all the extended shutdowns of entertainment and leisure businesses with the round of various government stimulation payments all helped to trigger the bitcoin growth that we are saying today.

Although bitcoin is not as high as it once was because its current value is at least 20,000 dollars it is still predicted that it is going to come back again. However, the high volatility of Bitcoin is what is preventing it from being used universally as a currency. It is not easy to predict the future but for bitcoin, it is looking very bright.

How to Invest in Bitcoin

Do you want to invest in bitcoin? If yes follow the directions beneath.

When was Bitcoin worth $1?

Bitcoin today is one of the most notable cryptocurrencies being used worldwide and it was only in 2011 that it managed to cross a dollar for one Bitcoin. When bitcoin launched it was about 0.40 dollars per Bitcoin. In May 2011 bitcoin managed to exceed $8 and since then it has been on the high side.

What is the most 1 Bitcoin has been worth?

Who owns the highest number of bitcoin?

Below is a list of the owners of the highest amount of Bitcoin:

These are the companies that own the highest amount of bitcoins available.

14 Free Of The Best To Play MMORPG Games