What is the Metaverse of Things? Based on futurism and science fiction, the metaverse is simply a hypothetical iteration of the Internet as a single, universal, and immersive virtual world that is facilitated by the use of Virtual Reality (VR) and Augmented Reality (AR) headsets. While in colloquial use, a “metaverse” is a network of 3D virtual worlds focused on social connection. 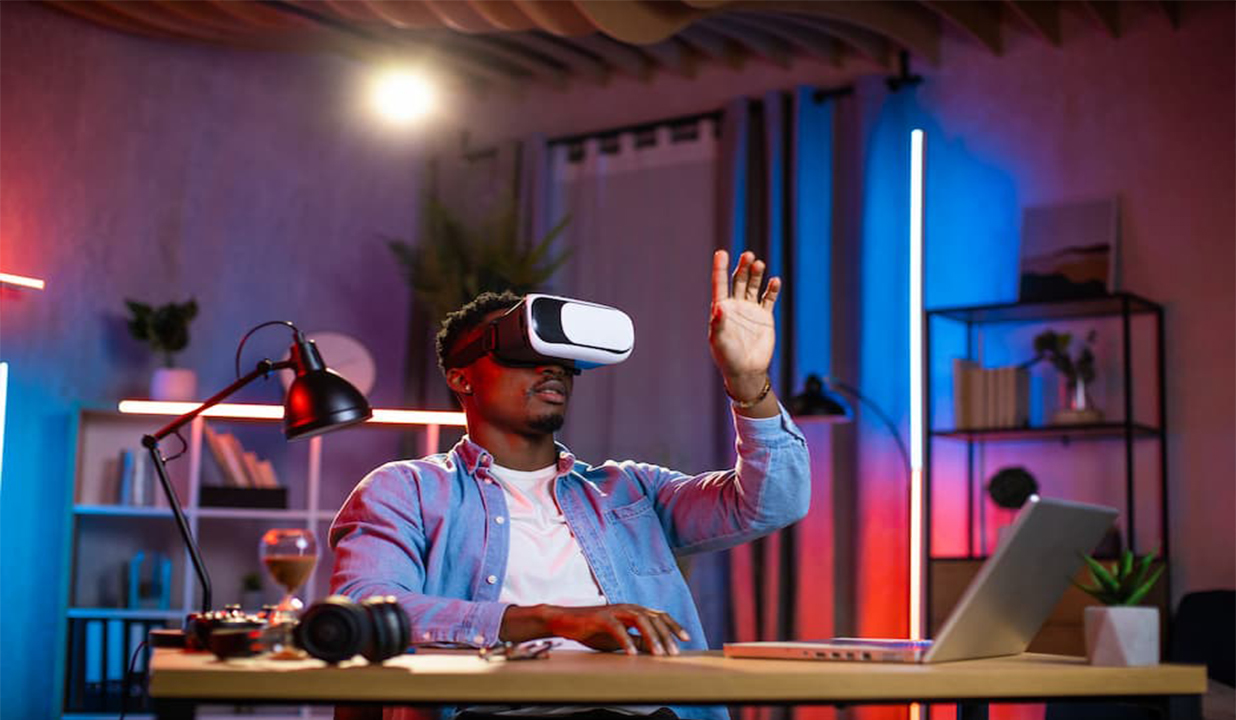 What is the Metaverse of Things?

Both have unlimited opportunities. With the intersection and union of both these two technologies, it creates unlimited possibilities for all the users out there. However, there is no doubt that both of these technologies have a long list of possibilities.

What is the Metaverse?

Is it a virtual universe with endless possibilities we can escape into? Is it the dystopian future of the internet, built on speculative sci-fi? Or is it just a fancy method of categorizing extended reality (XR), an umbrella term encompassing augmented, virtual, and mixed-reality technologies?

This is mostly described as online spaces where people socialize, work, and play as digital representations of their identities. Unlike in a Zoom chat, the spaces don’t disappear when you’re done, so they are there for someone else to use.

However, users can create 3D avatars of themselves and communicate with one another in the virtual environment. With this technology, anything is possible here, including making friends and participating in games and idea exchanges.

What Is the Relationship Between the IoT and the Metaverse?

To better understand the IoT and Metaverse relationships, you first need to know how both technologies work individually and how they work together.

How do the IoT and metaverse work? IoT works by collecting data from users. Also, the whole infrastructure of the IoT revolves around devices like sensors, laptops, computers, cameras, etc. that collect and analyze user data to create something meaningful out of it. While Metaverse is the virtual reality that works by showing the data collected from the real world.

For example, the metaverse makes use of AR and VR technology to determine physical activities, which eventually become dates. However, it is displayed in the metaverse as the activity of the avatar, or the digital twin of your real self.

Based on one viewpoint, “digital twin” is an umbrella term that encompasses data input, data management, modeling, and simulation in the metaverse internet of things. According to this approach, the notion of a digital twin is becoming increasingly sophisticated and overcrowded, and it is also one of the most crucial things that connect the IoT and the metaverse. However, this is what the “digital twin” signifies in the context of the metaverse.

The Main Connection Between the Metaverse and the IoT

And the second thing is AR (augmented reality), which is concerned with cyber-physical meta settings. All of this AR serves as the AR application that you employ today.

As time goes on, the IoT will enhance your sensory interface to the VR environment or the VR metaverse. As you see nowadays, games have interfaces that can capture your movement and control. In the future, you will have IoT devices linked to your body or a camera body suit to instrument your state and health in the metaverse of things.

Metaverse vs. Internet of Things

The metaverse is a world that hosts a virtual community. However, the Internet of Things might become much more broad and complex than the metaverse. At its core, IoT tunes things links them and uses analytics to extract meaning and insights from the data collected from the long-anticipated linked IoT devices. This links the virtual world; it offers an immersive experience and facilitates easy interactions.

Further, the IoT firm has balanced years of lofty expectations with the reality of the metaverse. So, it is almost impossible to bring it into reality without focusing on the IoT.

What is the role of the Internet of Things in the Metaverse?

Do you wish to know how IoT will contribute to the growth or how the development may impact the underlying IoT technology?

One of the biggest issues is how to map data from real life, in real time, into a digital world. So the basic work of IoT will be to integrate the physical world with the digital one.

Moreover, the immersive virtual world of the metaverse will need increasingly sophisticated IoT architectures. And augmented reality (AR) rather than virtual reality is where the metaverse’s true buzz is (VR).

So IoT will make it possible for users to be more than just connected to the virtual and physical worlds. Not only that, but it will also enable the creation of a person’s “avatar,” or digital twin, in the metaverse.

What to Expect in the Metaverse

There are two main things to expect, which include the following;

There are new e-commerce opportunities that emanate as a result of the metaverse. Customers can access products and services in novel ways through 3-D interactive shopping experiences.

For example, customers might search the virtual Apple store, play with the newest iPhone, and attend Genius Bar classes rather than a static website duplicating a real Apple store. Or, customers in a retail store can try on clothes in a changing room before purchasing and having the actual clothes transported to their homes. Also, including cryptocurrencies in the metaverse enables faster and more secure payment methods for items.

Over the years, a lot of people have invested their money in real estate to secure a place to live. With this, virtual land is now a new possibility for investors. In the metaverse, the land is already being sold. Just like in the real world, the location of the land plays a major role in determining the price. You should know that land in desirable places and close to a busy intersection will cost more.

Metaverse: Some people describe it as virtual worlds, while others refer to it as an experiential result of Web3, which is thought to be the next major advancement of “the Internet.” To put it simply, it is a virtual community that is housed in a virtual world.

IoT, also known as the Internet of Things, is a notion that is likely just as broad and crowded as the metaverse. IoT is about instrumenting, connecting, and applying analytics to the data gathered from billions of predicted connected IoT tools to derive meaning and insights.

The Internet of Things (IoT) firm is well known for its struggles in balancing years of unrealistic expectations with a long history that predates the invention of the phrase.

What is the “Internet of Things + Metaverse”?

Examining the points of intersection between the two worlds will help you understand what IoT + Metaverse is or signifies. However, the digital counterpart would be this point of intersection. Although it would be an odd way to use a digital twin, the consequences are worth discussing.

A digital twin is simply a digital representation of a particular physical object’s real state and condition. The reflection should ideally be both practical and as close to real-time as possible.

Moreover, digital twinning is used in the IoT application of condition monitoring, which has been around for a while, and data describing the dynamic features of an item you monitor is given digital meaning through digital twins.

What are the things in the Metaverse?

The metaverse (also known as virtual reality, the virtual universe, or cyber world) is somehow similar to games like Second Life and other online role-playing environments in that it lets users take on alternate personas, meet new friends, and even create their own characters.

It is a virtual world in which people live, work, shop, and interact with others—all from the comfort of their couch in the physical world.

What is the Metaverse, and how is it different from the internet?

A lot of experts look at this as a 3D model of the internet. Primarily, a place that parallels the physical world, where you spend your digital life. It is also known as a place where you and other people have avatars and interact with each other through their avatars.

What is the Metaverse in real life?

It is referred to as an immersive and persistent three-dimensional virtual realm, shared by many users, that spans various digital platforms and merges with the physical world, where people can shop, work, play, and hang out together in real time.

Who owns the Metaverse?

No one owns the entire network. This is not a physical thing that one can own. It is a virtual 3D world where everyone can take part. Thus, there are different metaverses created by different people or teams.

What is a Metaverse example?

The Sandbox is an example. Sandbox lets users play and build virtual worlds with the option to monetize their experiences, services, and products for sale or trade. It also allows users to own non-interchangeable in-game assets such as non-fungible tokens (NFTs) and buy and sell real estate.