Wildlife Conservation is simply an act to protect wild species and their habitats so as to maintain healthy wildlife. This practice is applied to species that are in danger of becoming extinct by unnatural causes. Causes like climate change, pollution, unreasonable law, poaching, and so on. 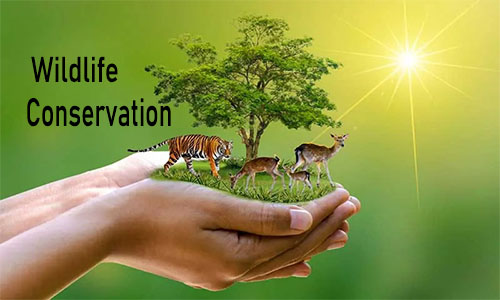 The report has it that that about 27,000 species of the ones accessed are at risk for extinction. Thus, expanding to the already existing species, a UN report on biodiversity put this estimate.

It was also acknowledged that an increasing number of ecosystems on earth containing endangered species are disappearing. So, to address the issue they mapped out both national and international government efforts to preserve the earth’s wildlife.

Another example of challenges surrounding wildlife is the pollution of water, or rise in water temperatures, which results in the barrier reef losing its colors and large parts of the corals on the reef dying.

There are two main types of this conservation, find out both the types, the importance of wildlife conservation and the issues that surround it, in the sections below.

Here are the two main types of wildlife conservation.

In situ is the type of conservation that deals with the conservation of habitats, species, and ecosystems where they occur. However, it’s an in-situ conversation and the natural processes and interaction are conserved including the elements of biodiversity.

Ex-situ: this has to do with the Conservation of elements of biodiversity out of the context of their natural habitats. Its examples include zoos, botanical gardens, and seed banks.

Wildlife conservation is important, check out the variety of importance below.

The above are the basic Importance of this wildlife protection. With this, I believe you now see how important it is to protect this wildlife and its habitats.

Discover the latest wildlife conservation jobs at https://www.conservation-carrers.com/conservatio-jobs/wildlife-jobs. You can search for available jobs by region using the search tool at the top of the homepage. Or select the all regions tap to access jobs in all regions.

When you get to the page where available jobs and positions are outlined, locate the position you want to apply for any click on it. Follow the onscreen directives to fill out the form. After applying, wait to see if you will be employed and you’re good to go.

These are the issues surrounding wildlife.