Windows Alternative to Devonthink? Devonthink is not available on Windows, however, there are lots of alternatives that run on Windows with similar functionality. One of the best Windows alternatives is “Joplin”. Joplin is both free and Open Source. 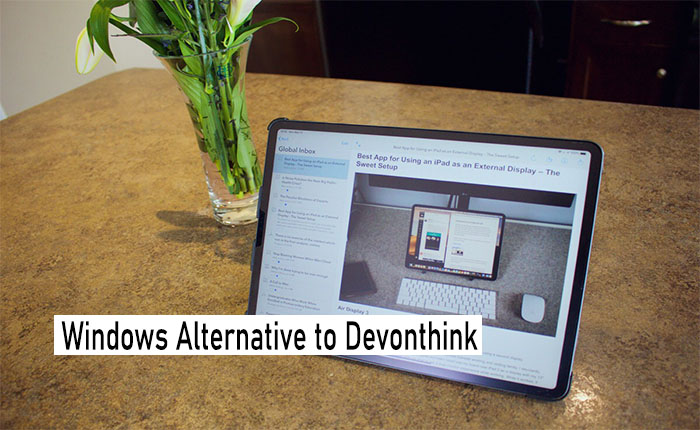 In this write-up, you will get to access another outstanding alternative to Devonthink available for Windows. With this, hopefully, you can find a suitable replacement.

Some amazing alternatives include- Obsidian which is a Free Personal, Notion- a Freemium, Zotero a Freemium and Open Source, and Zim – Free and Open-Source software. Look out for windows alternatives to Devonthink software, in the sections under;

Joplin is one of the top alternatives to Devonthink. t a free, open-source note-taking and to-do application, that can handle a large number of notes organized into notebooks. However, the notes are searchable, it can also be copied, tagged, and modified either from the applications directly or from your own text editor.

After Joplin, another software you can try out is Obsidian. Obsidian is a second brain, for you, forever. The human brain is non-linear: humans jump from idea to idea, all the time. So, your second brain should work the same. It’s indeed a good alternative.

With a lot of tools, it’s hard to keep everyone on the same page, but not so with Notion. A notion is a new software that unifies them all. The software is just like Google Docs, though everything is organized and discoverable by your team. It features a real and perfect collaboration in real-time.

Zotero is a free, easy-to-use Firefox/Chrome extension or standalone software that helps you collect, organize, manage, search and cite your research sources directly in your favorite word processor, with about 300 MB free online storage. The software is one of the best Devonthink alternatives. Zotero only deals with referencing PDFs, books, etc.

Zim is another software that can replace Devonthink. The software brings the concept of a wiki to your desktop. You can store information, link pages, and edit with WYSISYG markup or directly typing some lightweight markup syntax and see it previewed as you type.

With Note ledge, users can capture inspiration from Pinterest, YouTube, or web pages, organize ideas in one place, and add their notes. Also, you can make mood boards or quick sketches to visualize and present ideas!

The Trillium Notes comes with an original feature list with personal marked Highlights. However, Notes can be arranged into an arbitrarily deep tree. And, a single note can be placed into multiple places in the tree.

Dendron is another windows alternative to Devonthink.  It is an open-source, local-first, Markdown-based, note-taking tool built on top of VSCode. The software supports all the usual features you would expect such as tagging, backlinks, a graph view, split panes, and lots more.