Windows Alternative to Mac Mini? If you’re searching for an amazing machine that can alternate Mac Mini, that works perfectly on windows devices, you’re in the right place. This article will give you the best windows alternative to Mac Mini. The old Mac Mini was the most affordable MacOS based machine one can buy. Apple has incorporated the Apple M1 chip in the new 2020 Mac Mini. However, it comes with 8 CPU cores and 8 GPU cores. 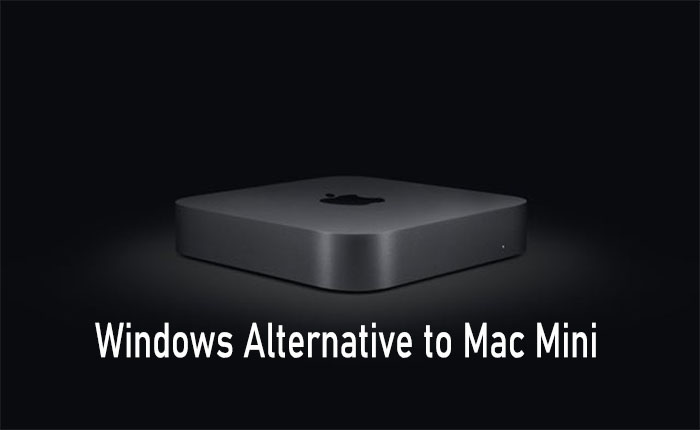 The entry-level Mac Mini now spots Apple’s own silicon, the 8-core processor with 4 performance cores and 4 efficiency cores. It begins with 8GB of RAM and 256GB SSD storage and relies on the onboard 8-core GPU for graphics as well as a 16-core Neural Engine for other computing tasks.

The mini desktop or small form factor segment has seen a decline as more people move to an all-in-one machine or a laptop. Here are the top 5 best Mac Mini alternatives;

The latest series 11 NUC Performance Mini PC is out. It is highly powered by up to Intel Core i7-1165G7. The system lets you take advantage of Intel’s powerful Iris Xe embedded Graphics that offer discrete graphic performance.

Further, the ultra-small form factor PCs from Intel are offered as a ready-to-use or as a kit. This means you can get your hands into the configuration and assembly of your own mini-PC.

Therefore, for most people, the ready-to-use option, configured and tuned by Intel with Windows 10 installed will be the better answer. And also, you get a choice of processors with the Intel NUC 10 Performance mini-PC.

HP Z2 is a purpose-built workstation that comes from a long line of powerful machines. They are small in size, that is, small enough to mount to the back of a monitor, under the desk or rack-mounted. So, to give you an idea of how far the Z series mini workstation has come, the earlier G3 specification begins with an Intel Core i5 processor with 8GB RAM memory and 1TB HDD storage.

ASUS PN50, a baritone system with AMD Ryzen 4000 series chip.  And Barebones systems are the only way that enthusiasts and PC builders can get their hands on the 4000 series chip as these are not available on their own.

CUBI 5 is another Barebones PC. It comes with a similar profile to the Intel NUC and ASUS PN series above. Greatly powered by 10th generation Intel Core i3, Core i5, or Core i7, however, you can specify this as a full system, if you do not wish to get your hands dirty or as a barebone system. If you decide to go for the latter, you can choose your own storage and memory.

Their recommended system is powered by Intel Core i7-10510U, the energy-efficient Comet Lake processor. This lets the design of the small form factor desktop be super small with a tiny footprint of 12.4cm cube. Also, with a VESA mount onboard, it can be stuck to the back of the monitor taking up no desktop space whatsoever.

BRIX from Gigabyte, another Barebones, powered by AMD Ryzen 4000 series chip, you can get the low-profile K series of this higher model, the H series. Users will need to select their choice of factory-fitted CPU. However, for longevity and maximum performance, select the AMD Ryzen 7 4800U, an octa-core processor that supports 16 threads.

You can now select up to 64GB of DDR4 memory for the dual SODIMM slots and pick up a store of your choice. Thus, for the latter, you can use either the NVME M.2 SSD slot or the 2.5-inch HDD/SSD drive bay.